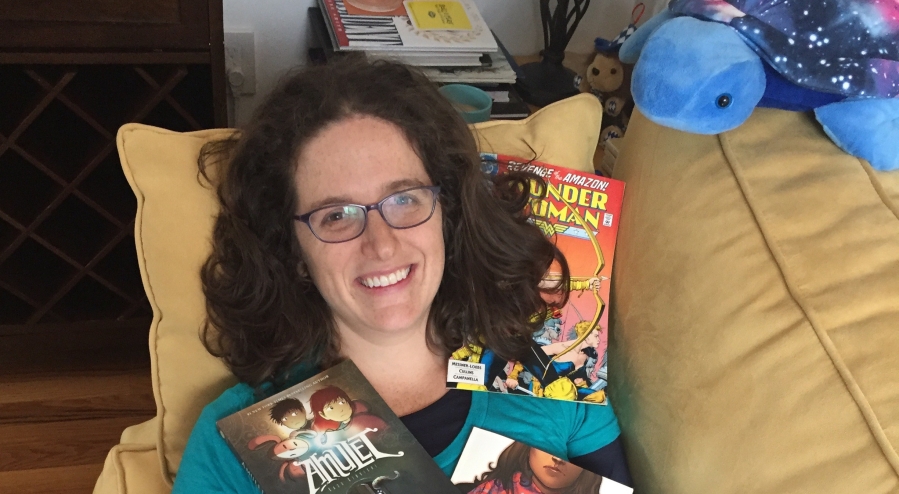 Tell us about when you first started to think about writing this play. What was the inspiration behind The Villains’ Supper Club?

I started imagining The Villains’ Supper Club during the first year of my daughter’s life. The first image I had for the play was Galactic Girl pumping in a phone booth while still wearing her cape. I wanted to write a comedy about what it’s like to keep a brand new little person alive on no sleep, while also going back to work. I had several productions back-to-back that first year, which meant I was pumping all the time, traveling across the country with a tiny infant, calling the pediatrician from numerous time zones, while also doing rewrites—and did I mention not sleeping? I learned very quickly that new moms are true superheroes. My plays shine light on the stories we don’t tell about women. New moms are crucial to our species’ survival and yet new moms are invisible until you are one. The Villains’ Supper Club is a comic love letter to all the new moms out there.

What special challenges does Galactic Girl have as new mom and an actual superhero?

Galactic Girl is the only superhero left in the world. Even before she had a baby, her plate was pretty full keeping everyone safe from the Villains. Now, as a new Mom, she is also breastfeeding, pumping, hungry all the time, tired all the time, finding childcare for when she’s working, and fending off unwanted child-rearing opinions from everyone she meets. She fights villains daily while finding time to pump, writes newspaper stories for her day job, and fields calls from her babysitter, aka her mother, who doesn’t approve of her working. That’s a typical day.

What did you learn about and love about comic books–and how did you turn that on its head for this play?

I did a deep dive into comic books, graphic novels, and superhero movies as research for this play. We’re living in a distressing moment and superheroes are tremendously appealing right now. While immersing myself in superhero stories, I loved the big worlds, the mythology behind the characters, the fights between good and evil, and the tremendous heart. However,  I was pretty distressed by the way women are treated. Why is Lois Lane clumsy and a terrible speller? Why are female superheroes naked and fragile just when they need to be strong? Why are 99% of the heroes men?  The deeper I dug, the madder I got. Here was this vast new genre I wanted to love, but most representations of me were degrading or non-existent. Toni Morrison once said that she started writing because she didn’t see the books she wanted to read on the shelf. So, I took her advice and wrote a feminist superhero farce about a new mom. And I used my secret weapon, heartfelt comedy, to challenge the misogyny and sexualization of women in comics. I believe stories are powerful. So, I wrote a new one.

It’s such fun to have a large cast of actors with such comic chops. How is it to see your characters come to life for the first time with this cast?

It’s exhilarating. All the characters have leapt to life in the hands of these actors. Sean and I create epic comedies that are highly physical and deeply heartfelt. These actors are wonderfully game for all of it.

Who are your favorite superheroes and why are they?

My favorite two superheroes are Ms. Marvel and the new Spider Woman. Ms. Marvel, aka Kamala Khan, is a Pakistani-American teenager in New Jersey, who accidentally gets superpowers. She grapples with being different from her family, facing racism, falling in love, and saving the world on a daily basis. It’s heartfelt, funny and pretty poignant at times.

The new Spider-Woman has a fabulous twist—Spider-Woman is pregnant in the first issue and has a newborn baby in the second issue. She grapples with how to be a superhero and new mom at the same time. I discovered this Spider-Woman after I started writing The Villains’ Supper Club and it was inspiring for me to see a world linked to the one I was imagining.

If you were a superhero, what would your superpower be?

I have always wanted to fly. It would be handy to be able to stop time. But the best superpower of all would be give everyone empathy.

Why do you write for the stage?

Favorite way to relax: I love reading. I love watching well-written TV. I love swimming. I love dancing. I love taking walks at the Arboretum.

Favorite activity with your kid: Dancing in the kitchen is pretty great. 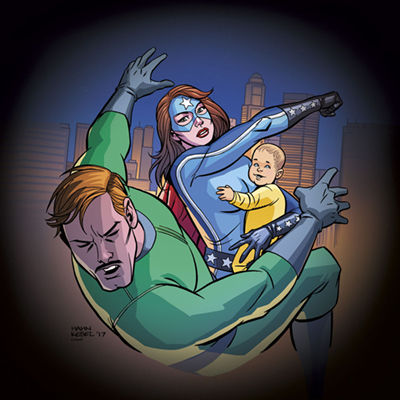