And in this corner. . .  So begins the oldest of competitions, the brutal pas de deux known as boxing.  But “the sport” (more later) has always been much more than a fight between peers.  From Jack Johnson and James J. Jeffries to Mayweather and MacGregor, the stakes are often higher than who remains standing at the end or who takes home the biggest pot.

Of course, the city of Lowell itself holds a storied place in the annuls of boxing.  Since 1945, the New England Golden Gloves competition has been held every year at the Lowell Memorial Auditorium.  And while Lowell might not have Brockton’s Rocky Marciano, it does have its share of famous boxers, from Billy Koumantzelis (the unofficial bodyguard of Jack Kerouac) to David Ramahlo to “Irish” Mickey Ward  to Ward’s half brother Dicky Eklund, whose legendary 1978 fight with Sugar Ray Leonard proved that, in boxing at least, one can lose but still win.

But as a way toward self-respect, glory, or simply a understanding of your place in the world – a pugilistic bildungsroman – boxing is a tricky venture.  It can be an escape – sometimes the only one available – or a dead-end, as washed-up fighter “Mountain” McClintock learns in Rod Serling’s moving 1956 teleplay, Requiem for a Heavyweight, for his skills in the ring, though formidable, are of little use in the real world. Indeed, even those who achieve great success, like Jack Johnson, the first African American world heavyweight boxing champion, pay a steep price for that success, as explored in Merrimack Repertory Theatre’s inaugural offering, The Royale, written by Marco Ramirez and directed by Megan Sandberg-Zakian.

From the gladiators of ancient Rome to the highly orchestrated spectacles of today, the vision of two men (or women) in a battle to the finish has uniquely captured the attention of the public – and not just the stereotypical rabble.  After surveying the crowd at a Golden Gloves match, MRT artistic director Sean Daniels noted that he was surprised to see MRT “patrons” among the audience members. Sensing the connection between the city and boxing, he was then determined to bring The Royale to Lowell.

But just as boxing is more than a sport, The Royale is more than a boxing tale.  In the play, Jay Jackson, the “man who cast a shadow in the dark” (admirably played by Thomas Silcott), must battle an adversary much greater than another pair of fists in his quest for the heavyweight title.

John L. Sullivan. Max Baer.  Joe Louis.  John Ruiz.  Rocky Marciano. Muhammad Ali.  The list of champions parallels the patterns of immigration and migration seen in the United States. Irish. African-American. Jew. Italian. Muslim.  For boxing, with its rules and regulations, uniquely provides a level playing field, where (presumably) race and creed don’t matter.  This ideal of a fair and “clean fight” is what Max, the white promoter and referee in The Royale (played by Mark W. Soucy), hopes to achieve – despite the recognition that no rule or regulation can erase centuries of bigotry and disenfranchisement.

For race and religion were acute issues in Jim Crow-era America, and in the case of  Sullivan versus Johnson, the stakes were much higher than money or pride or prestige, the parameters broader than height or weight or reach, for they involved nothing less than the loss of white hegemony in the sports world.  The 1910 fight occurred at the height of the rejuvenation of the KKK and quickly became a fight not between individuals but between races.  Coming out of retirement, Sullivan had everything to lose and was likely a bit scared, knowing what might happen if he didn’t win and depending on the referee to limit any personal damage.

Jack Johnson won, of course. The decisive decision was a sore point, and the country reacted in a way that reflected the significance of the perceived loss of Anglo-Saxon prestige. It didn’t help that Johnson was adept at tweaking early 20th century sensibilities with his deliberately flamboyant behavior, although he was always reserved and thoughtful when discussing boxing.

In The Royale, Jay Jackson becomes acutely aware that this particular bout has significance beyond that of a typical match.  His goal is not just a win, but also respect and recognition – especially for those who have been denied a place at the table, denied even the common courtesies of everyday life, denied – to some degree – humanity itself.  Jackson, nicknamed “The Sport,” is the very personification of boxing, with all its potential for fame, fortune, redemption, and – he hopes – retribution.  Jackson is fighting not only for himself, but for his young sparring partner Fish (Toran White), trainer (Jeorge Bennett Watson), and sister (Ramona Lisa Alexander), indeed for all those who bear the burden of racism.

While the story of Jack Johnson is well known, the Jay Jackson of The Royale is not, and Silcott ably inhabits the realm of this complex man with his growing inner turmoil.  But historical knowledge does nothing to inhibit the tension of the play, and it may actually add to it, for we know the inevitably violent conclusion, even when the players themselves can only imagine.

It is a testament to the skills of Marco Ramirez that your heart is beating wildly until the last line of the play.  The playwright brings you into the thoughts of the fighters – a scary place at times – as they battle an opponent much bigger than a single person wearing over-sized gloves. 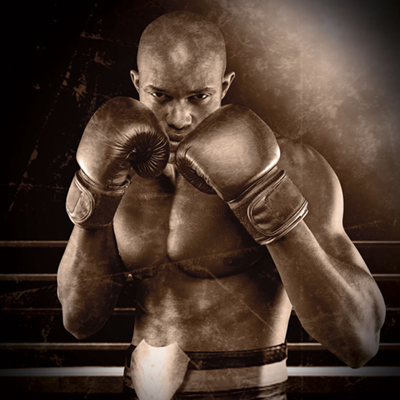